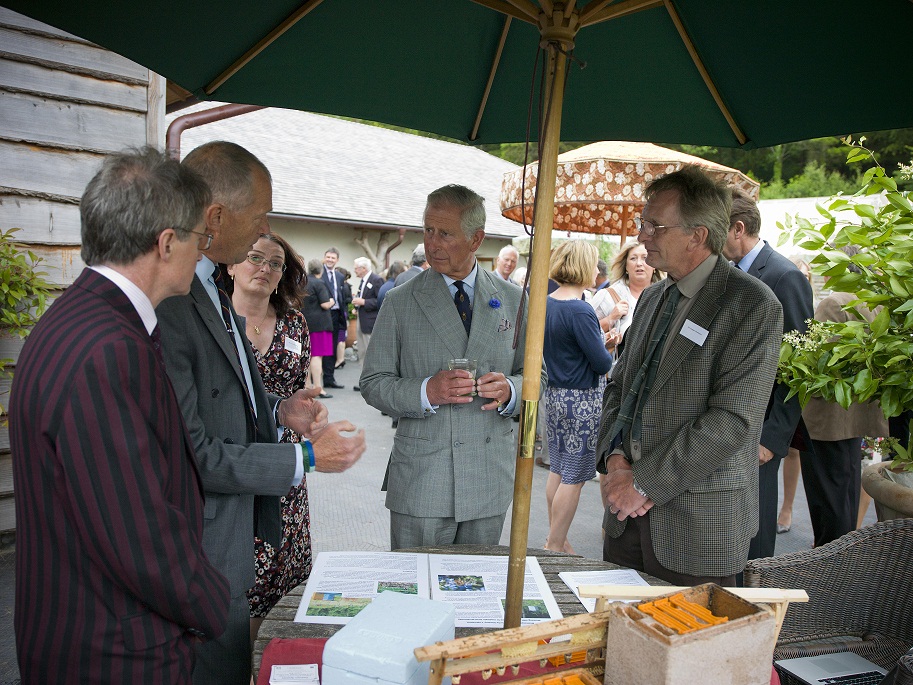 The Duchy of Cornwall is supporting a project to save the Cornish remnants of the native Black Honey Bee.

At one time the Black Honey Bee was the only sub-species to be found in Cornwall. However, the combined impact of Isle of Wight disease in the 1920s and an increasing reliance on Southern European varieties of bee has led to the gene pool being diluted to the point where a relatively pure Black Bee now represents as little as one per cent of the British bee population, which is itself declining at an alarming rate.

To help counteract the decline, the B4 Project - Bringing Back Black Bees - was established by Andrew Brown in 2012 and the Project set about coordinating support from beekeeping groups and conservation organizations across the South-West of England.  Twenty black bee colonies have been established on Duchy land in Lostwithiel and near to Callington in Cornwall. These sites have been chosen as they will hopefully provide ideal conditions for the successful breeding of native Black Honey Bees.

Andrew said: "Cornish Black Honey Bees have excellent flight strength, even in cold, wet and windy weather. The old strains rarely swarm and are very docile. All the Black Bees I have seen possess a strong drive to collect pollen and nectar; we are also selecting lines that have a natural resistance to the varroa mite which is the vector for most of the bee viruses found in the UK."

Nick Bentham-Green, a Director of the B4 Project and Chairman of The Bee Improvement Programme for Cornwall said: "One of the keys to the future success of the B4 Project is having more isolated mating sites like those in Lostwithiel and Callington as they create what we call a 'buffer zone' and ensure the Queen Bees breed true. If we can reduce reliance on imported honey bees, we can make honey production and the keeping of bees more sustainable too."

Working with experienced beekeeper Rodger Dewhurst, the B4 Project has established the breeding site at Lostwithiel and two more at Eden and Heligan. Recognizing the need for secure breeding sites, Rodger uses more than 18 apiary sites around the county as reservoirs for these native strains which he selects for their characteristics and resistance to disease and the varroa mite.

Rodger says: “Maintaining a viable population of native bees is critical and has become more difficult in recent years given the loss of native bees, disease, imports and recent poor summers. It requires lots of time and dedication and it can take two to three years before a new site can be reasonably relied upon.  And that’s not the end of the process, as it can take three or four complete life cycles of a colony to confirm that the desirable traits are retained in your selected stocks.  So this is an important project that will outlive me.”

Duchy of Cornwall Land Steward, Roger Halliday, added: "The apiaries were installed on Duchy land just in time for Their Royal Highness's annual visit in July and The Prince was delighted to meet the B4 team at the Duchy Nursery and to learn more about the Project.  The Cornish Black Bee is unique and distinctive to the County and essential for maintaining local eco-systems and biodiversity. Their preservation is something which the Duchy of Cornwall readily supports."

It is estimated that the bee population in Britain has declined by a third since 2007 and the number of Honeybee Colonies has dropped by 75 per cent in the last century. The B4 project hopes to help reverse this decline with a combination of conservation initiatives including making local near-native bees more available.

With the support of the Heritage Lottery Fund , the B4 Project  runs education programmes with Paignton Zoo, Eden, The Lost Gardens of Heligan and Paradise Park in Hayle, as well as working with the local bee-keeping community to encourage them to use the Cornish strain of Black Bee to boost local stocks.